Solving the world's largest Rubik's Cube takes seven and a half hours: And we think that's completely reasonable

I must admit, this is beyond my comprehension. 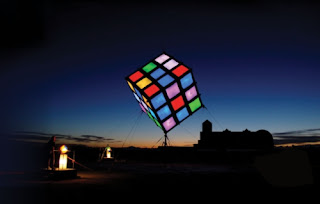 LSC Needs the Public's Help to Create the World's Largest Rubik's Cube®
The Giant Glowing Cube Will Travel Around the World for Seven Years
JERSEY CITY, N.J., May 21, 2013 /PRNewswire-USNewswire/ -- Liberty Science Center is endeavoring to build Groovik's Cube – a 1.5-story high Rubik's Cube® that can be controlled via the Web from anywhere in the world. The Center is asking people around the globe to contribute to a $500,000 campaign to make Groovik's Cube a reality via the popular fundraising site Indiegogo (www.lsc.org/grooviks). Donors will receive exciting perks ranging from t-shirts to trips to Budapest as a show of appreciation for their support.
(Photo: http://photos.prnewswire.com/prnh/20130521/DC17671)
"Groovik's Cube will serve as a symbol of the power of math, science and creativity," says Paul Hoffman , Liberty Science Center President and CEO. "With the public's help, we can send this powerful interactive icon around the world, inspiring people of all ages with the excitement of science and technology."
The giant art-meets-science installation will premiere at LSC in spring 2014, on the 40th anniversary of the invention of Rubik's Cube. It will be the centerpiece of "Beyond Rubik's Cube," a 7,000-square-foot exhibition designed to celebrate the world's most popular puzzle and the many cool things the Cube has inspired in robotics, engineering, mathematics, design, art and film.
The original Groovik's Cube was designed for the Burning Man art festival in 2009 by a team of artists led by Barry Brumitt andMike Tyka , but will be installed indoors at LSC as it is not sturdy enough to travel extensively. The funding will help LSC create a new and improved version to be installed outdoors where it will be viewable from NJ and NYC for nine months before it begins a world tour alongside the traveling exhibition.
Perks for donors exist at every level and range from posters ($25) and t-shirts ($35), to exhibition preview events and the opportunity to help install the Groovik's Cube ($25,000 each). Personalized Cubes, speed cubing lessons, and exclusive Cube control (with celebratory light shows for successful solving attempts!) are also available. One generous donor will have the opportunity to explore Budapest, the city where the Cube was born, guided by LSC CEO and friend of Erno Rubik , Paul Hoffman ($35,000, trip for 2).
To get involved, please visit www.lsc.org/grooviks.
About Liberty Science CenterLiberty Science Center (LSC.org) is a 300,000-square-foot learning center located in Liberty State Park on the Jersey City bank of the Hudson near the Statue of Liberty. Dedicated to bringing the excitement of science to people of all ages, Liberty Science Center houses 12 museum exhibition halls, a live animal collection with 110 species, giant aquariums, a 3D theater, the nation's largest IMAX Dome Theater, live simulcast surgeries, tornado and hurricane-force wind simulators, K-12 classrooms and labs, and teacher-development programs. More than half a million students, teachers, and parents visit the Science Center each year, and tens of thousands more participate in the Center's offsite and online programs.
Rubik's Cube ® used by permission of Seven Towns Ltd.
SOURCE Liberty Science Center
Posted by A at 12:48 PM No comments:

Relax! sit back and relax with this nostalgic mug inspired by the iconic image of your favorite classic toy. Specially designed square mug that looks great and is actually easy to drink from with its special curved lip.
Posted by A at 9:07 AM 1 comment:

As a runner traing for his first marathon (see http://runnersdilemma.blogspot.com/), and as a guy who plays with his Rubik's Cube a lot, this caught my eye.

LONDON, March 2 (UPI) -- An animator says he will attempt to set a new Guinness World Record by working out 100 Rubik's cubes while running the London Marathon.
Posted by A at 9:37 PM 1 comment:

?
Products remain classic. Variations on packaging are about it. Many of us true Rubik's geeks though are more than happy to give these as Christmas gifts, or to replace worn out devices.
The classic: Rubik's Cube

30 Years of Geeking Out With Rubik's Cube

Has it been that long? Sort of. 1977 is the real date of its birth, but oppression in Hungary had yet to be lifted.